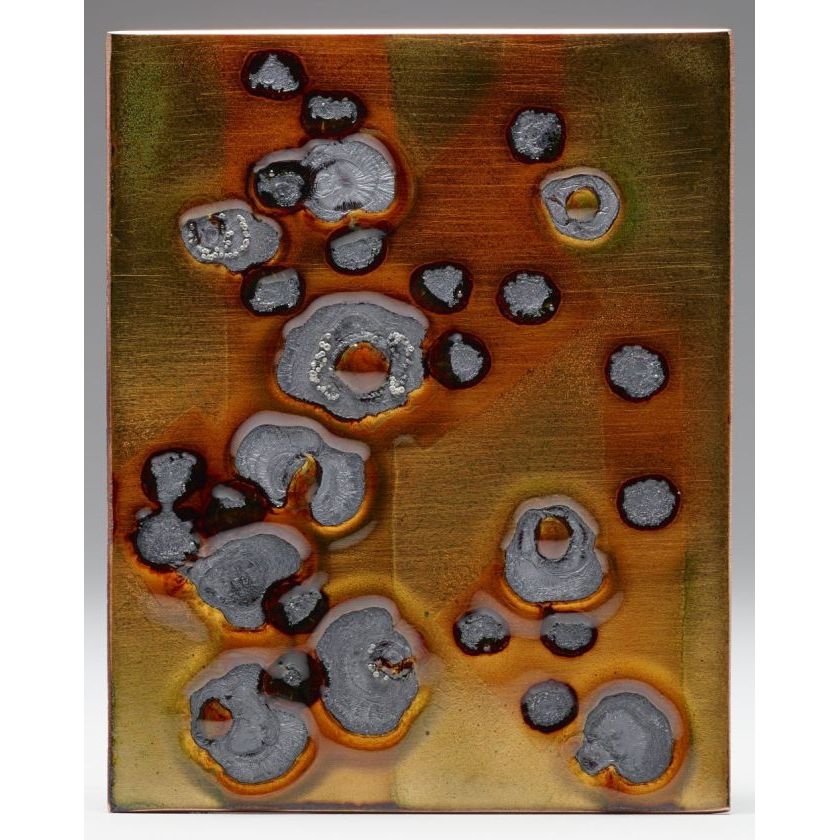 Averill Shepps has been working in enamels for 50 years, making her living as an enamelist for most of that time producing bowls, plates, wall pieces and jewelry for sale and exhibition. Many of her techniques are her own development, and she has taught workshops throughout the United States. She has exhibited work in the U.S.,Canada, England, and South Korea. Her work has been featured in: The Art of Enamelng, Contemporary Enameling: Art & Techniques, and 500 Enameled Object as well as in several articles and 2 cover articles in Glass on Metal. She has been elected to her sixth term as President of The Enamelist Society.

I was a Geology major in college with a minor in Art, a good background for enameling where the science and the art are both important. After learning the basics in an initial workshop, I have been mainly self-taught and have always experimented with different techniques, which first led me to work mostly by building up my designs on bare copper and then covering the whole surface with enamel. Several years ago years I experimented with 36 gauge fine silver extensively, firing it onto the enameled surface and covering it with transparents. I have textured light copper foil and fired it onto an enameled surface and covering it as above.

In recent years I have done an Environmental Series where the pieces show beautiful transparent enamel representing the pristine environment along with heavily oxidized areas resulting from raising the final firing temperature to the eutectic point. These areas represent environmental destruction. I have even used cat hair, as well as mica flakes, and copper screens. I use whatever is at hand and whatever works to make the statement or produce the desired effect.

I have been experimenting with techniques that mimic the amazing Hubble telescope images, while furthering work on what happens at the eutectic point. The unique and amazing eutectic experiment works give the viewer a sense of the violent forces that have formed the Universe while the maker feels like she is bringing the piece to a precipice and rescuing it just before it is about to be drawn into a black hole.

Color, transparency, and texture have always been of prime importance in my work. I use the transparent colors almost exclusively and use the opaques as accent colors where needed. I use sifted techniques to apply the enamels, and only very occasionally lay enamels on with a brush. Enameling has brought me great joy over many years, and I am so fortunate to have discovered and been able to work in such a beautiful medium.