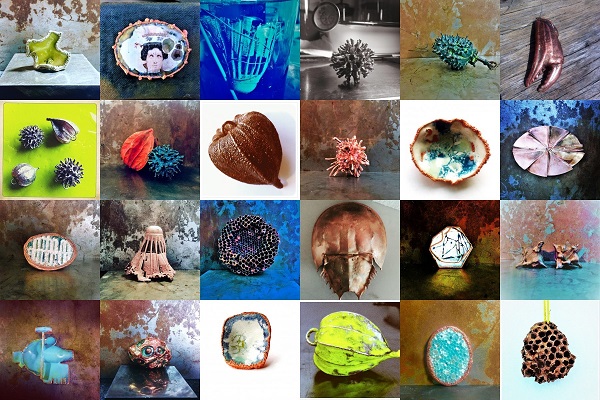 Anne Dinan is an internationally recognized jewelry and visual artist and instructor who attended the School of the Museum of Fine Arts in Boston. She studied welding, photography, lithography and learned that it was metal that most interested her. After learning everything she could about metals, she turned to glass where she learned how to blow, cast, fuse, slump, and more. The natural progression of things led to vitreous enamels, which she has been exploring for over twenty years.

Dinan, a member of The Enamelist Society and a juried member of the League of NH Craftsmen, has presented her unique and diverse pieces at many national and international shows including:  • Alchemy4, The 2017 Enamelist Society national touring exhibition and for Alchemy3, a 2015 traveling exhibition at five New England galleries.  • The 2017 LOOT show in New York.  • The November 2017 “From Minimal to Bling” show by the Society of Arts & Crafts in Boston.  • The Fall 2016 “Past is Present” exhibition at the Twiggs Gallery in Boscawen, N.H.  • “Myths – Test Drive” in Germany at the Winter 2016 Munich Jewellery Week; and at the Augo Avco gallery in Leonidio Arcada, Greece.

Dinan teaches enameling and creative techniques through her popular online classes and at workshops in Mechanicsburg, Pa., at Metalwerx in Waltham, Mass. (scheduled March 2018), and at the Littleton (N.H.) Art Gallery (scheduled April 2018). At the August 2017 Enamelist Society biennial conference in Tennessee, she was a class assistant to renown enamel artists Merry Lee Rae and Ruth Ball.

In addition to creating commission pieces for American and international clients, Dinan takes part in many New England shows including the Button Factory in Portsmouth (NH); The Vintage Bazaar Fair in Massachusetts and Maine; the September 2017 Fall Equinox Fest in Exeter (NH); and in November 2017, at the Brickbottom Open Studios in Somerville, Mass.

Other achievements include:  • At the 2015 conference of The Enamelist Society, judges at the International Juried Exhibition awarded Dinan’s Unknown Relatives second place in the wall piece category. Unknown Relatives was based on a series of old portrait photographs found at a family farm in Michigan. Dinan created the 20-piece assemblage through an innovative use of kiln-fired vitreous enamel on copper from digital waterslide transfers. The pieces were mounted on found wood from an old wheel barrel. From conception to completion, Unknown Relatives represented a year of creation and experimentation. The work is now a part of the permanent collection of the Enamel Arts Foundation in Los Angeles, California.  • The unique creative process of Unknown Relatives was featured in the 2015 publication The Book of Alternative Photographic Processes (3rd Edition) by Dublin, N.H. artist and photographer Christopher James.  • Juried entry to the 2017 Halstead Design Challenge “Memento” competition/exhibit for the Society of North American Goldsmiths annual conference in New Orleans.  • Dinan founded the Trade Handmade site on Facebook that has brought together more than 2,000 international artists in a unique marketplace forum.  • She opened and operated her own studio/workshop Studio 2B2 in Newburyport, Mass. (1990-2000) where she sold her unique line of handcrafted glass and metal jewelry.  • Dinan was highlighted as the December 2015 “Featured Enamelist” on the Advocates for Fine Art Enameling web site.